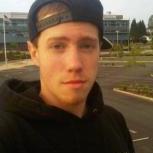 By natratalanatra, October 6, 2018 in Other Gaming